Computer Science and IT 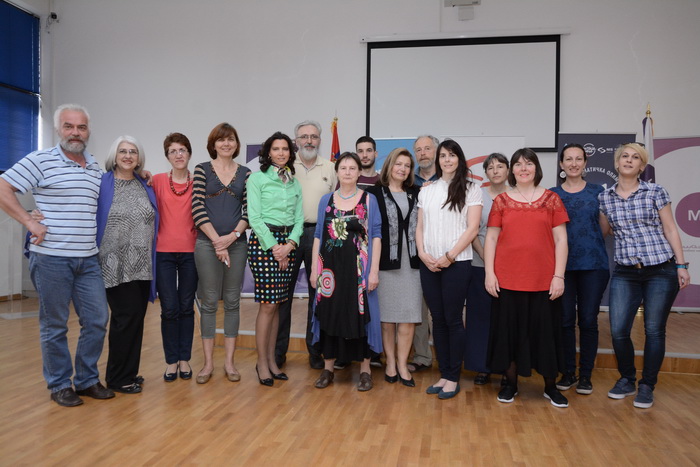 Mathematical Grammar School introduced computer science in autumn 1969, three years after its founding. A subject called “computer science and mathematical machinery” was thought in our school, when there were no such subjects being thought even at most European Universities. Classes having this subject were: class 3a (third grade) and fourth grade (general teaching course).

Subject computer science was performed in classes of the 3rd and 4th grade. Third grade students were using the fictional three-address machine and through the symbolic language of this machine got acquainted with the basic parts of a computer. They also learned to use the programming language as a means for communicating with a computer and the basic principles of programming.

Teaching computer science was performed with a total of 4 classes per week in the third grade, and at the end of the school year, students had internships. The internships were performed in two parts. Firstly students learned the symbolic language of a particular one-address computer which they needed to program, and secondly they were writing and guiding programs through the computer, which meant mastering the language of the operating system necessary for communication with the hardware. We should keep in mind that at that time, computer systems did not allow interactive work. Operating systems were not "customer friendly" and it was not easy to communicate with a computer.

Fourth grade students, with a curriculum of 6 classes of computer science per week, were using one of the most advanced programming languages - FORTRAN, and thus they were expanding their views of programming problems and what can be solved through programming. Their gained knowledge got checked and ascertained within the practical part which was performed during the winter holidays through the system IBM360 on the Faculty of Science in Belgrade.

Fourth grade students of the general teaching course had computer science had only 2 times of per week. Through this subject they learned the basics of numerical analysis, especially its chapters which show how to approximately, but also with the desired accuracy perform calculations on a computer.

The interest for the course “computer science and mathematical machinery” was increasing. So our school bought a computer - Liton1231 which was used for the practical teaching, and it’s the use of the extended school activity was also planned. The first 20 graduates completed this course in Mathematical Grammar School in 1971. A total number of 319 students completed this course until the introduction of vocational education. The last generation graduated in 1980. The first professor of computer science was Ljubomir Protic who started to teach from the school year 1968/69, when the first generation of Mathematical Grammar School students was in 4th grade. This teaching program also included Bosko Jovanovic since 1969, Georgije Stojkovic since 1970, and Dusan Tosic since 1973. Many other young colleagues participated in this teaching program as well.

Thanks to the teaching programs which opened their views to the digital age, Mathematical Grammar School students became educators who spread computer literacy among us. Most students, who have completed computer science teaching program in the Mathematical Grammar School in the seventies, were easily employed in data centers and large enterprises as managers. They were latter the main implementers of computer science subjects in secondary education reform that followed in 1977/78.

Mathematical Grammar School also had to reform its teaching programs in order to keep the status of a specialized school. However, thanks to the enthusiasm of teachers, and above all, the struggle of our principal Dr. Milan Raspopović, Mathematical Grammar School was not abolished as the same school in Zagreb. In it, like in many other grammar schools of that time, computer operators, mathematicians and statisticians received their education. The teaching programs had to be the same as in other schools, however not the manner of their implementation. Unlike other grammar schools, which had huge problems with teaching staff for computer science subjects, Mathematical Grammar School employed professors who have already had experience with similar subjects, as well as young professionals who have completed their studies at the Mathematical Faculty in Belgrade.

The emergence of personal computers caused a real revolution in the late seventies. Computers were accessible to most people, and Mathematical Grammar School students showed what could be done with it in the best way. Dejan Ristanović, who he graduated in 1981, wrote about personal computers in a magazine called “Galaxy”, when he was still a grammar school student. He was one of the founders of the first programmers club at the Faculty of Electrical Engineering in Belgrade in 1983. Dejan also launched the first magazine about computers called “Computers in your home”. For the first issue of the magazine he wrote all the articles himself. Dejan published more than 550 articles on this topic. He was also one of the founders and co-owner of Sesame, the first large system for modem communications. Many professors and students of the Mathematical Grammar School popularized the usage of computers together with Dejan through several computer magazines in the mid-eighties. Not only the articles, but also many books about computers and programming were written by our teachers and students.

Soon after the founding of the programmers club at the Faculty of Electrical Engineering, a club for programmers was established in the Mathematical Grammar School. The club worked in two sections during the school year 1983/84: for beginners with sixty students and for experienced programmers with twenty students. Besides the courses, regular meetings were held with a lot of guests at the club on Thursdays.

Members of the programmers club achieved remarkable results. They thought computer courses for all three shifts of SORA Belgrade-84, as well as a summer school of programming at Bjelašnici. At the national competition in computer science organized by factory “Ivo Lola Ribar” our team consisting of Milos Milačić, Misa Jovčić and Dejan Cvetkovic won the first place and a reward - a computer “LOLA 8” for the school. We were the only school in the competition whose both teams were among the winners. The competition was attended by 28 teams. Incidentally, one of the members of the winning team today is the director of Microsoft office in Serbia. The only Microsoft development center in Europe is in our country, and almost half of the experts in the development team graduated in the Mathematical Grammar School. The situation is similar in other leading IT companies. Former students of the Mathematical Grammar School are setting new IT trends in the in the world famous companies such as: Oracle, Siemens and IBM, and especially in the domestic IT companies such as: IT, Saga, CET and Comtrade.

Nevertheless, during the vocational education a large number of teachers left the Mathematical Grammar School, what affected the results of work in the field of programming and programming languages in a negative way. Problems emerged because there was a great demand for this type of personnel, and as soon as our young colleagues had the chance to find a better position, they would leave the poorly paid teaching jobs.

The education reform enabled the Mathematical Grammar School to return to its original principles. The first generation of the special experimental program for the educational profile of “mathematical programming associate” enrolled our school in the year 1988/89. The new plan and program for education were published in the "Sluzbeni Glasnik" SAS No.2, April 15th 1989, and the innovated program of the Mathematical Grammar School was published in full in the "Sluzbeni Glasnik" no.7, October 13th, 1995.

During the designing of the computer science teaching programs the fact that our students are usually above average and are quite gifted mathematics was taken into account. This fact also provides good basis for them to develop into professionals who will represent our society. Thanks to good knowledge of natural and computer sciences they were easily able to successfully follow and participate in the achievements of modern science. Analyzing the programs of similar schools in the world and given the fact that a purely user approach to teaching could mean a future dependency on IT developed countries, the program was designed to equip students for solving various problems.

Professors of the Mathematical Grammar School: Stanka Matkovic, Dusa Vukovic and Mijodrag Djurisic are the authors of the approved textbook for Computer Science and Informatics for the third grade of grammar school, which is published by “Zavod za udzbenike”. Textbook adheres to the modern teaching program and introduces students to the world of programming through numerous examples of creating applications with a graphical user interface.

The following links contain brief video lessons and can serve as an introduction to the world of programming in the programming language C + +; and the document attached contains some additional examples, which can be used for computer science classes: