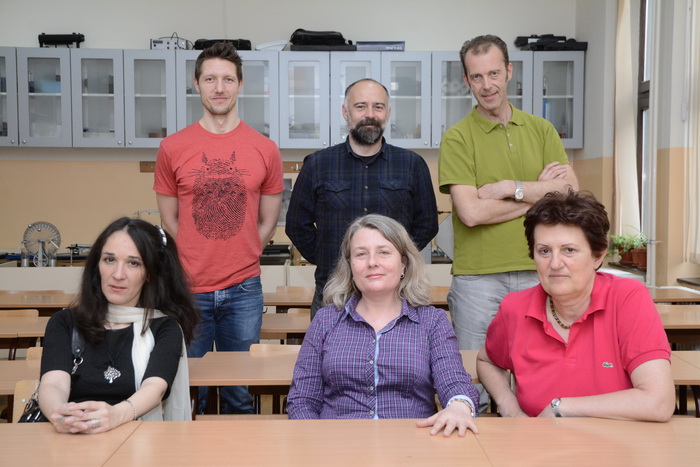 In addition to teaching mathematical subjects, physics has also had a special place since the founding of the school. Our students have four classes of physics per week and the teaching of it is performed by a special curriculum. The authors’ of the first curriculum and programs for physics were Raspopovic Milan, the first professor of physics at the Mathematical Grammar School and Emilio Danilovic (an adviser for physics on the level of the republic). Physics curriculum was expanded about 50% compared to the level of physics thought in other high schools with natural sciences department.

Mathematical Grammar School has inherited an empty building which used to be an elementary school “Jovan Jovanovid Zmaj”. In equipping the school we needed to start from the beginning, from the purchase of phones, desks and chairs to the equipment for the cabinets. In the beginning we needed to provide adequate working conditions. It started with equipping classrooms and laboratories for physics and one year later equipping chemical laboratory, library and cabinet for programming and IT. At the beginning, relatively large funds were invested in the cabinet of physics and in the laboratory (for that time unexpectedly large). So, it was initially understood and accepted that the teaching of physics can only be successful if the theoretical interpretation is adequately followed by experimental concretization and verification.

Physics textbooks physic used by students of first and second year at technical faculties were also used in the Mathematical Grammar School for a long time. These textbooks were written by D. Ivanovic, B. Zizic, G. Dimic, Vucic, Pavlovic and others. Since its founding the school was subscribed to well-known mathematical and physical magazines, such as "Quantum", "Physics in school", "Mathematics in School" etc.

The first significant change in the Mathematical Grammar School was made after three years of work in 1969. Together with the general department a programing department was also introduced. Within the programming department, in addition to physics, our students had the opportunity to study electronics, two classes per week. Teaching of electronics was led by Milan Raspopovic during the first ten years. He was also the school’s principal. Later on Vesna Rapaic took over the teaching of electronics.

Mathematical Grammar School became an experimental school in 1975 (in order to avoid the reform of secondary education) with the new Program of physics. The following textbook was used in the implementation of this program: “Basic Physics” by Pinski and Javorski which was translated from Russian by Bojana Nikid and Gavrilo Vukovid (In the meantime, employed as a full time professor of physics).

At the time of the reform of secondary education (1977-1988) our school had mathematicaltechnical and natural-technical departments for the following professions: technical developer, computer operator, mathematical-technical assistant and statistician. In natural-mathematical department there are two professions: technician for nuclear physics and technician for laser physics. Within the mathematical-technical department students of all professions were taught general physics with three classes per week. And within the natural-technical profession, in addition to general physics, nuclear physics, laser physics, applied physics and physics of technical experiments were thought with the 8-10 classes per week. Such a distinctive physics teaching curriculum demanded an appropriate teaching staff. Therefore physics teachers group expanded with two professors: Natasa Calukovic, a notable and talented former student of our school and a successful student of physics (employed full-time since 1978) and Vesna Rapaic who has already proved to be a successful high school physics teacher (employed full-time since 1980). Thus, the Mathematical Grammar School formed one of the best groups of physics teachers not only in Serbia, but also throughout the former Yugoslavia. These results were affirmed and are still being confirmed in school, republican, federal and international competitions.

It is Interesting an important to point out that since 1970, teaching of physics included staff from universities and scientific institutions, from assistants to academics. We should also emphasize longterm cooperation with the Institute of Physics; department of physics (later the Faculty of Physics); Faculty of Electrical Engineering and others. During the implementation of experimental work in physics during the reform of secondary vocational education, the school had a lot of help from a famous and world renowned scientist and academic Momcilo Ristic, from the Institute for Advanced Materials of Serbian Academy of Sciences and Arts. Mathematical Grammar School got the status of a new experiment in 1989, which was a bit different from the previous experimental status. All of this was done in order to preserve the identity of this unique school in the world. This was best illustrated by the results at the federal and international competitions. During the implementation of the last experiment the school returns to the old position of the "good old" Mathematical Grammar School. At this time of the new experiment our physics curriculum consisted of four classes per week (general and programming). The experiment was completed in 1995, when the Serbian Ministry of Education decided that the Mathematical Grammar School should have the status of a school for gifted students in mathematics and science. It was also decided that the Mathematical Grammar School should obtain the status of a school of special national significance, and as such it was the first school in the history of Serbia.

The teaching of physics in Mathematical Grammar School is performed with four classes per week in the first, third and fourth grade and three hours per week in the second grade. We would also like to pint out the fortunate cooperation with former students, as students from different Faculties (holders of international awards). This form of cooperation in the teaching of mathematics, physics and computer science began regularly since the school year 1995/1996.

The first physics textbooks were published in the twenties of the last century (from first to fourth grade). They were specially written and specially prepared for the students of our school. The authors of these books are: Natasha Calukovic, Bojana Nikic and Milan Raspopovic. The first physics textbooks for students of the Mathematical Grammar School from first to third grade were written from 2002 to 2006. The authors of these valuable books are Natasa Calukovic, Vesna Rapaic and Natasa Kadelburg.