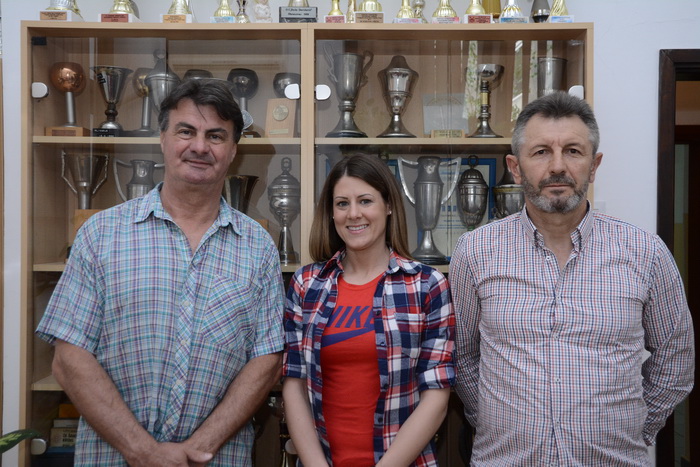 Classes of physical education are held twice per week, what we considered to be insufficient given the amount of work our students do for the regular subjects. Our students had the third class a long time ago, which was held in one of the city's swimming pools, however now that is just a memory.

Physical education should help students create a habit of an everyday care of their body, developing and maintaining it through fitness. The aim is wake the student’s interest for the three types of physical activity - game, sport and other forms of physical culture, what contributes to the humanization, socialization and validating their personal values.

Hawing in mind the amount of studying our students do for the regular subjects, we have tried to please them through physical education, and so the principle of recreation really distinguished itself. We try as much as possible to make this effect useful.

In addition to the regular physical education classes, additional sections are held especially in basketball and volleyball. Interclass championships are organized in basketball, football, volleyball, table tennis every year. The most important and most beautiful events for students where teams from all classes fought and cheered wholeheartedly have occurred in the gymnasium and in the school yard. Each generation and each class had their sports heroes. These competitions always included a large number of students.

With our work and attitude towards students, we tried to convey the love of sports, and so many of our students actively started to train in clubs, only later to became famous athletes, even playing for the national team.

Even though the number of students is much smaller than in other high schools we achieved significant results in both team and individual competitions. Showcases in the cabinet for physical education are filled with trophies, medals, plaques and diplomas.

The biggest success, as expected, was achieved by our students-chess players. These are some of the professors who managed to develop the interest and love of our students for chess:

In cooperation with the chess school "Partizan" and their managers Bozidar Rajacicevic, the judge of FIDE and the chess grandmaster Nikola Karaklajić, chess achieved great success in our school. Some of the famous names from the world of chess were also the students of our school: Alisa and Mirjana Marić, Sanja Vuksanović, Ivan Marković, Radoš Bakić, Bojan Knežević, Dragan Kosanović, Branimir Ćertić, Jovica Petrović, Moma Vučićević, Marijana Savić ... The greatest success of our school team was the first place at the "Youth Day" chess festival held in Pula, with the participation of many chess teams from Europe. Our schools team consisted of - Radoš Bakić, Zoran Petrović, Darko Milinković, prof. Nenad Lazarević and, as a backup, Sanja Šimpraga.

Many famous chess masters would often come to our school, hold lectures and play simultaneous games with our students and professors. Maja Chiburdanidze, a world champion, has demonstrated us a great honor by playing 40 simultaneous boards. Our guest was also Mr. Dorfman, coach of the world’s champion Garry Kasparov.